The agile architect: who makes the architecture decisions?

This article is based on my research findings and is derived from part of one of my PhD thesis chapters.

In agile software development, architecture design is not the sole responsibility of a single designated architect or team of architects. Architecture decisions are made collaboratively by active members of the agile team, rather than by so-called ivory tower architects with one-way relationships with the development team. A wide understanding of the architecture and collaborative decision-making help improve the communication within the team, and hence help make the team more agile.

When the scope of the system that the team is building extends to other teams (perhaps as a multi-team project or being within a multi-project organisation), keeping decision-making within the team is not enough: additional input is required from architects beyond the team who have an understanding of the overall business problem being solved and the overarching ASRs (architecturally significant requirements) – primarily the non-functional requirements.

When a team is small and it consists entirely of capable (probably senior) software engineers, then if it is working on a small standalone project or system, decisions can be made democratically or by consensus. The whole team plans the architecture and comes to a team-wide agreement. A common factor among teams making decisions by consensus is all the team members have similar levels of experience with the technology, and all have good domain knowledge and understanding of the business problem. There are probably no junior developers who do not have sufficient understanding to make the required architectural decisions. 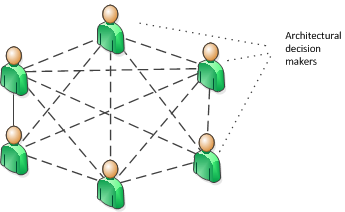 The need to have an understanding of the business problem is consistent with Fowler’s definition of architecture: (this article may require a subscription or payment)

Those who make the architecture decisions are those who have a good understanding of the ASRs and how they fit into the context of the business.

Consensus decision-making only works on small single-team projects, when there are no other teams to coordinate with. This method is rarely successful in medium-size or large teams because it is difficult for a large number of software engineers to reach agreement. In this case one of the team members needs to act as the architecture owner for the team (see below).

Decision approval within the team

Large teams can avoid the problem of having to reach a team-wide consensus by having a designated architect who makes the final decisions, or has a ‘casting vote’. The designated architect is effectively the architecture owner [Ambler] or coordinator [Coplien and Bjørnvig]: they do not make architecture decisions on their own, but rather use their experience and knowledge of the business problem to confirm the decisions made by the team, or, in the case of lack of agreement, make the final decision. 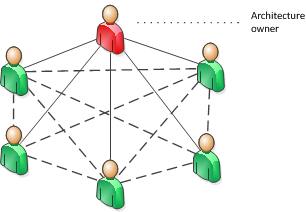 Some see the role of the architecture owner as a guidance and sanity checking role.

A team (any team) may largely comprise members with the title of ‘developer’ or ‘software engineer’; the title of the architecture owner is typically ‘lead developer’, ‘senior developer’, ‘technical lead’ – or (surprise!) even ‘architect.’ These different titles all refer to similar roles and could be considered synonyms. The architecture owner may also go by the  title ‘team leader’ or ‘team manager’, although these names tend to suggest a contradiction with the agile practice of teams being self-organising.

It is most important to have someone with overall responsibility for the architecture when the project spans two or more teams, and it is not possible for the whole team to have an understanding of the overall business problem and architecture. Without someone with overall responsibility, different teams will lead to silos with each team designing their sub-system architecture in isolation, with the risk of the team not meeting the ASRs of the overall system.

The need to understand the architecture across multiple teams becomes more important as the size and complexity of the system, or the number of related systems being built, increases and more teams are involved.

When the system being built is part of a much larger system or is one of many related systems being built (such as a product line), the team is unlikely to have a detailed understanding of the overall system and the business problem being solved. A single team cannot be sure that the architectural decisions it makes are appropriate for the larger scale. 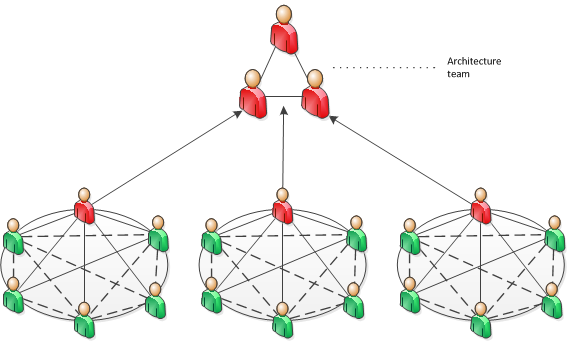 Ideally this is just a rubber-stamping exercise.

Decisions made outside team

Agile teams generally view non-coding architects as undesirable because these architects are often disconnected from the system being built and so are not in the best position to architect it – there is plenty of literature and comment elsewhere on the impact of the “ivory tower architect.”

Many teams have constraints on their architectures imposed by the customer. These constraints are effectively  architecture decisions made outside of the team, such as the technology stack to be used. Examples of such constraints include technologies chosen for strategic reasons and for support reasons. The customer’s decision to engage certain ISVs is also an implicit constraint if those ISVs are aligned with or only have expertise in certain technologies, which, in turn, may impose certain architectural styles:


“The customer decided the architecture when they went out and contracted all the parts.”